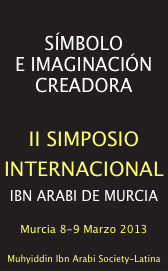 This second symposium organized by MIAS-Latina (Muhyiddin Ibn Arabi Society- Latina) and the Cultural Centre Puertas de Castilla of Murcia (headquarters of MIAS) as part of the Ibn Arabi Film Festival (IBAFF), will focus on the theme of Creative Imagination and its relation to the symbolism in Ibn Arabi's thought. The symposium will also look at the work of other authors and currents of thought throughout time, which both agree with and differ from the ideas of this universal Murcian author of the 12th century who expounded, with unparalled mastery, the metaphysical foundations and the spiritual subtleties of the Imaginal World - the world of the soul, of the arts, of visionary experience, of dreams, the intermediate domain in which the sensible and the intelligible, the corporeal and the spiritual meet, uniting the opposites.

From the perspective of the Imagination, all realities constitute living symbols, polyvalent meanings that reveal to the seeker, on their endless interior journey, the mysteries of the essential and transcendent Unity of Being and its multiple manifestations.

The topic of the Imagination and of the image-symbol will be approached from different angles, since the term khayâl or Imagination, in Ibn Arabi ?s work, can designate both the macrocosm and the barzakh, Isthmus or interworld, as well as the soul or microcosmic dimension and the specific imaginative faculty of the human being.

In particular, the symposium will focus on the relationship between the arts and the Imagination: in the audio-visual domain, Bill Viola (USA) will speak to us about his creative experience and how he has been inspired by Ibn Arabi and related sources; in the field of the plastic arts, Ana Crespo (Talavera) will introduce us to the world of colour in Sufism, with particular reference to Bill Viola's work, and Jose Miguel Puerta Vílchez (Granada) will present diverse aspects of traditional and contemporary calligraphic art linked to Ibn Arabi's thought; in the arena of architecture, Jane Carroll (United Kingdom) will evaluate a series of symbolic correspondences between the spiritual geometry of Andalusian architecture and Ibn Arabi's cosmology; in the field of literature, Jane Clark (United Kingdom) will examine Ibn Arabi's poetics in his Interpreter of desires, looking at his symbols and means of expression, and she will also talk about the process of cataloguing and digitalizing the most important manuscripts of Ibn Arabi ?s vast work, carried out by the Muhyiddin Ibn Arabi Society in Oxford.

There will also be an examination of the psychology that characterizes the thought of the Andalusian master: Suad Hakim (Lebanon) will talk about the diverse modalities of meetings and imaginal experiences reflected in the work of Ibn Arabi; Jaume Flaquer (Barcelona) will speak about the meaning of Jesus in the work and life of Ibn Arabi, in particular concerning the theme of active Imagination.and Alberto De Luca (Italy) will explain the crucial topic of the hayra or spiritual perplexity in the mystical journey.

The symposium therefore brings together eight lecturers of international renown, including well-known creative artists and some of the most outstanding world experts on Ibn Arabi.

The Ibn Arabi Prizes (IBAFF/MIAS-Latina) will be awarded this year to two people who honour us by their presence and participation in the symposium: The Tarjuman Prize 2013 (for research, translation and edition of Ibn Arabi's work) is awarded to the prestigious Lebanese scholar Suad Hakim. The Barzakh Prize 2013 (for creative work inspired by Ibn Arabi) is awarded to the famous master of video art, Bill Viola.

Like last year ?s symposium, the 2013 symposium will again emphasize the universal relevance, the deep significance and the evident current importance of the enlivening thought of one of the major authors in history.  All the lectures can be listened to in both Spanish and English. Those of Suad Hakim, in French, and Alberto De Luca, in Italian, will also be translated simultaneously into Spanish and English.

Jane Carroll (MIAS - USA): The Circle and the Square: Interpenetration of heaven and earth in the al-Andalus of Ibn Arabi

Imagination. In search of the ‘treasures’ of colors.

The imaginal palm tree: its evocation in San Baudelio of Soria

On the occasion of the 2013 Barzakh Award - for creative work inspired by Ibn Arabi - being presented to internationally celebrated artist Bill Viola, we are opening the exhibition THREE WOMEN, a work which is part of the series "Transfigurations", a set of works reflecting on the passing of time and the process of transformation of our inner experience. Ibn Arabi describes life as an endless journey when he writes: "’Being’ is an ocean without shore. Contemplating it has no beginning or end, in this world or in the next". This profound view of human life's eternal nature is eloquently expressed in Three Women.