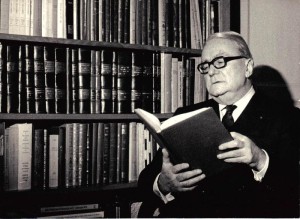 Orientalist and philosopher, Corbin is one of the most prominent thinkers of the twentieth century. Discipleof Etienne Gilson and Louis Massignon, whom he succeeded in the chair for the Study of Islam at the Ecole Pratique des Hautes Etudes at the Sorbonne, he was also one of the fundamental pillars - with CG Jung and M. Eliade, among others - of the Eranos Circle from 1949 to 1977, Director of the department of iranology of the Franco-Iranian Institute of Tehran from 1946 to 1970, professor for more than thirty years at the University of Tehran and a founding member of the University of Saint John of Jerusalem.

Henry Corbin opened the eyes of the West, about the existence of a completely unknown world: the deep spirituality of the great mystics and Shiite philosophy developed in East Muslim world, particularly in Iran, after the death Averroes. His work centered on the Islamic knowledge and spirituality, but developed in the context of the three monotheistic religions, has a considerable number of studies on rituals, as well as translations and editions of ancient unpublished Arabic and Persian texts, that he recovered himself patiently in the libraries of Turkey and Iran.

See all the news